“Leave the gun. Take the cannoli.” – Il Padrino aka. The Godfather

Cannoli and The Mafia. I knew only of these two things prior to traveling south to the beautiful island of Sicily. It was a trip full of bad weather, but this encouraged a relaxing weekend full of good food, friends, and the need to incorporate “godfather” quotes into our conversation. I ate my fill of cannoli and was lucky enough not to have a run-in with the mafia… I think…

10 of us jumped on a flight to Palermo, Sicily. We had reservations for one night in Catania and the other in Taormina (as advised by a friend of mine. He said it was his favorite city in Italy). We took a two-hour bus, through the heart of Sicily, from Palermo to Catania. The bus ride was gorgeous. I could not believe I was beyond the boot. I thought I had been swept away to Ireland. The rolling green hills and multitude of sheep made me believe I was no longer in a part if Italy. In many ways, Sicily is its own culture. Having been ruled by so many other cultures, like the Romans, the Moors, the Spanish, and finally being united into Italy 150 years ago by the King of Savoy, Sicily’s diversity can be seen in its unique blend of architecture and tasted in its food.

Upon arriving in Catania, we found our way to our hostel and immediately set out of find a seafood dinner. We dined on delicious seafood pasta, handmade and full of fish and muscles, and then I got to taste my first cannolo in Sicily! Hand-filled right before me, the shell was crispy, the ricotta cheese was sweet, and it was dipped in fresh Sicilian pistachios. Fantastic! 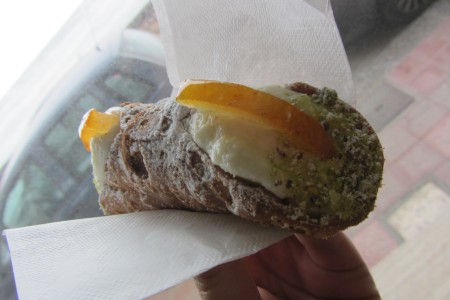 We woke up Saturday morning to a terrible storm. Strong winds and rain showers. Our intention was to visit Mount Etna, the most active volcano in Europe, but that plan had to change due to the snow-storm that was preventing buses from reaching the top of the volcano. We tried to explore downtown Catania, but the wind was too strong. We got a glimpse of its baroque architecture and were able to explore the food market near our hostel. The Sicilians advertise and display their food much differently then on the Italian mainland. Always shouting out the day’s special, merchants display their wares in a beautiful and tempting way. 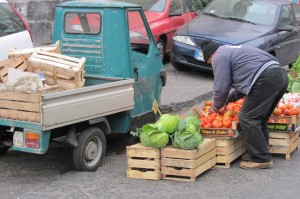 We headed out earlier then expected to our next destination. The walk to the bus station was not far, but it was quite an adventure. The wind and rain coming from the sea forced us to huddle against the buildings and hope we would not get blown away.

I think we heard hurricane sirens sounding as we neared the bus depot.

After a short ride to Taormina, we were greeted at the hostel by our host, Gianni, with a sample of the local Vino alla Mandorla (almond wine). Gianni is an older gentlemen who was so happy to entertain his guests. For everyone who was staying at the hostel, he provided a pasta supper that night and recommended some great places to get cannoli!

We ventured down to the beach where two of my roommates, Sta and Han, took a dip in the stormy sea. We got lots of strange looks from passers-by and one guy even took pictures (I am assuming to show his wife the crazy Americans). We found a café, La Dolceria, for lunch and had another cannolo and tried the Sicilian specialty: arancini. Mozzarella, tomato sauce, and peas are covered in rice and breadcrumbs and then deep-fried to create a delicious, pear-shaped, pastry! 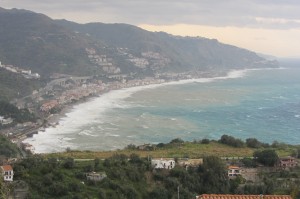 Finally, we took the bus up the cliffs to Taormina’s ancient center. The view was breath-taking! The waves were crashing on the rocks below, but the water was still bright blue. We could just see Mount Etna peaking out from below the clouds. Since the weather was gloomy, there were no tourists, so we were free to explore. I can’t imagine how busy this small town is during the summer. JC, Gabe, and I hiked a little further up the hill to an ancient, roman amphitheater. The theater perfectly framed the view of the sea. It is so cool that the Romans were able to construct things like this on such treacherous terrain. 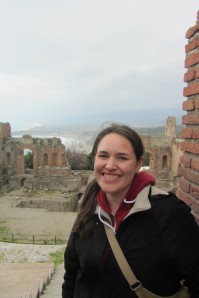 The last cannolo of the day was purchased at a shop across the street from our hostel. Pasticceria di Cassablanca had the best cannoli of the trip. The sweet ricotta cheese had little bits of chocolate mixed in. So tasty! 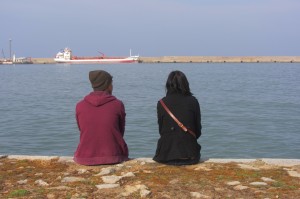 Last day in Sicily. We took the bus back to Catania, back to Palermo and spent the afternoon exploring. The weather was better, but not good enough to enjoy the beach. We spent a few hours soaking in the sun near the harbor, found some really good pistachio gelato, and visited the cathedral of Palermo. One thing that I liked about

Sicily was all the animals everywhere! I met lots of cats, all taken care of, who were roaming the street. I tried to coax one into my backpack, but he would not have it. And then again, I don’t think Knightly and Boots would like to have an Italian cat living with them.

I need to return to Sicily again some day. The people were so friendly,

the food exotic, and the views unbelievable!