Thursday we spent the day in Munich (München). Taking the train through the German countryside is very relaxing! The trains are always on time, unlike the ones in California. We arrived in Munich just before noon and in time to see the giant glockenspiel (cuckoo clock) strike 12:00. It was so fun to hear all of the tourists cheer as the wooden knights lanced and Bavaria, in blue and white, was victorious! 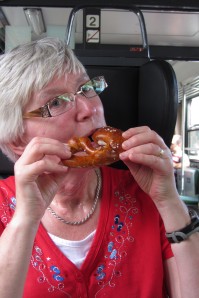 We ventured through St. Peter’s church to the Victualienmarkt and Beer Garden. We found wonderful pretzels. We ate our lunch outside of the Frauenkirche “Woman’s Cathedral”. This cathedral was the former stomping ground of our current Pope Benedict XV. There is an interesting story that goes along with this cathedral. There is a large black footprint in the middle of the foyer. The legend says, that as the church was being built, the devil came inside. As he stood in the center of the foyer, he looked up and could see no stained glass (because they were hidden behind the pillars.)

The devil stamped his food in excitement, leaving the footprint in the stone, because what good was a church with no windows? Yet, as he stepped forward, the windows appeared and the devil turned and fled.

Even though it was a very warm day in Munich, I had such a great time exploring and doing touristy things! My cousin Mel even told me that it was fun for her! She said that she had visited Munich many times before, but she had never looked at this great town through the eyes of a tourist or an architecture student! Once home, we had a great family BBQ on the lawn of my Tante Git’s house. 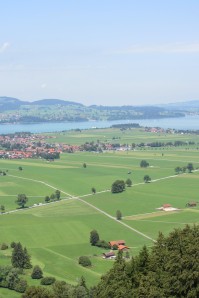 Friday was my favorite day in Germany so far, despite the fact that I fell and scraped my knee! My mom’s cousin Barb and her family picked up my aunt and I to visit southern Bavaria. This area, the Allgäu, is so beautiful! The green rolling hills of Germany suddenly turn into the rough and rugged Alps. King Ludwig II of Bavaria grew up in the castle Hohenschwangau and also built his fantasy castle, Neuschwanstein, which is perfectly situated in the foothills of the Alps. Both castles rise up above the surrounding towns and forest.

Gab and her husband Pet

Before touring the castles, we visited the town of Buching, a five-minute drive from the castles, to see the quaint town where my Opa was born. His family has lived in this area for generations and worked in the farming and tree harvesting. We found the site of his home along while meeting my mom’s other cousin Gab, who still lives in Buching. There is a beautiful site of the Alps and Neuschwanstein from Gab’s yard. The green fields are filled with cows and their farmers. (It is said that the cows of the Allgäu are more beautiful then the women. haha) I had never met my cousin Gab before, yet, she told me that she recognized me right away; that I looked just like my mama.

We toured Neuschwanstein first. After a long hike (on the hottest day in Germany for 20 years) we finally reached the castle that is clad in a beautiful marble and sandstone. King Ludwig II built this castle to honor his favorite composer, Richard Wagner. Every wall is covered with gorgeous frescos and tapestries depicting Wagner’s stories of “Tristan and Isolde” and “Persival and Gawan.” King Ludwig II was only able to live in his new castle for a few weeks. After vigorously taxing his people to build his extravagant castle, the King was mysteriously found dead in a lake not far from the castle.

Hohenschwangau was my favorite castle. King Ludwig II grew up in this castle and was always a dreamer. He brought his telescope to the Hohenschwangau castle to survey the construction of his new Neuschwanstein castle. Hohenschwangau as not as fantastical of a castle as Neuschwanstein, but it still depicted many of the folk stories of Bavaira and lookes over the beautiful Allgäu. One of the most interesting treasures in this castle is a loaf of bread from the King of Russia. This bread is now over 120 years old. Yum.

On the way home, we stopped at the Wieskirke. This beautiful UNESCO world heritage site is decorated in the most extravagant rococò style. The architect went overboard with gold leafing and cherubs, yet it is so peaceful and quiet. The only sounds are the footsteps of visitors on the tile and the soft bells of the cows in the fields around the church. This church was a must see for me because my Opa helped restore this church after it was bombed during WWII. 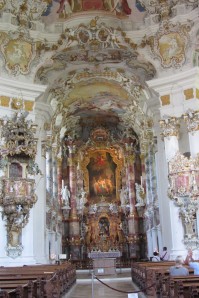 (have your volume up to listen to the cow bells!)

An amazing day ended with an amazing dinner! Käsespätzle!