Today, Tante Elk and I left Bavaria to stay with my Uncle Mich.

Uncle Mich lives outside Stuttgart in a sustainable house (more later). Stuttgart is the capital of the state of Baden-Württemberg.

After an easy morning of trying to fit everything back into my suitcase, Uncle Mich and my cousin Peti came for lunch at Tanta Git’s. I was sad to leave,

On the way to Uncle Mich’s house, we stopped at the Blautopfbut hopefully we will be able to return for Christmas! Tanta Git is so nice and made sure I was well fed! I don’t think I ever stopped eating while in Germany!

On the way to Uncle Mich’s house, we stopped at the Blautopf (Bowl of Blue) Lake. This lake is very unique. The Blau river sinks beneath the earth some 1200m to the north-west and resurfaces at the Blautopf. Uncle Mich told me that the scientists do not know how deep into the earth the river actually goes because strange things happen to the divers and instruments that go in too deep. Some blame this on a “water ghost” or mermaid creature. There is even a statue of said mermaid sitting on the edge of the lake. Water is very clear and becomes a beautiful and deep blue. A monastery was built next to this beautiful lake and houses some great fresco and one of the most extravagant iconic altars I have ever

seen. The altar has several panels that can move, all depicting the story of Christ.

Once home, I met my Tante Gert and was given a tour of the house. Uncle Mich and Tanta Gert own a packaging and binding company and Uncle Mich was so proud to show me how the machines work. For dinner we ate Raclette (this involves layering meat and potatoes with cheese. The cheese becomes melted when your personal cooking pan is placed on this fancy heating surface. So Good!)

**Architecture Nerd Info**
Uncle Mich’s house is very unique for Germany. It has no heating or air conditioning and is very sustainable. Many of the surfaces are unfinished, giving the house a comfortable, yet modern feel. The windows all face to the west to allow the house to be heated in the cold winters. The windows also have shades to keep the house cool in the summer. The floor to ceiling windows gave us a great view of the sunset and the amazing lightning storm that took place that night.

Today was the day of being a tourist. We all met up with Uncle Mich and Tante Elk’s half sister Nel.

She was so friendly to me and so excited to show me around Stuttgart. We began by taking the train into the city center. We took a very long walk through the Rathaus, a fabulous department store (it could give Galeries Lafayette in Paris a run for it’s money), past an indoor market, wine festival, Modern Art museum, and two palaces!

I was very surprised by this city! It is so beautiful, has a great and extensive history, and is home to some of the largest German brands! These brands include: Mercedes Benz, Ritter Sport Chocolate, Hugo Boss, and Porsche. Stuttgart is also home to the tallest TV tower in Germany and the next largest beer festival after Oktoberfest in München! 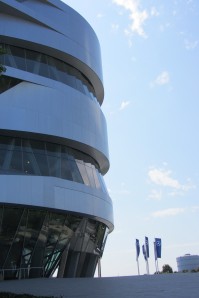 The best part for me was visiting the Mercedes Benz Museum! Not only was the architecture of this building amazing, but so were the cars! The museum took us through the history of the automobile and the many, many models of cars produced by the Benz Company. Did you know that Mr. Benz was the first man to patent the automobile? I thought is was very interesting how the museum showed how Mercedes Benz rules over almost every class of car; from luxury, to working, to racing! I would defiantly recommend a visit!

An early car ride to the Stuttgart airport. Tante Elk just left me to fly home to America. I sit here, waiting, for my flight to Firenze, Italia!